During the past six months transport companies across Europe have chosen en masse for the Nooteboom Manoovr. More than 500 axle lines have already been sold and many of these have been delivered by now. The Manoovr MPL semi low-loaders are available with 3 up to 10 axle lines. Marinka Nooteboom: “For almost two years we worked very hard on the development of the Manoovr. In that period we ourselves became more and more enthusiastic about the advantages of Manoovr, but the introduction was not without some suspense. Are our customers going to share our enthusiasm and how will the trade press react? We are delighted with the three Awards we received during the past year. They indicate that our enthusiasm for the Manoovr is shared by the panels of expert judges. And we are even more delighted with the large number of orders. We see this as an appreciation for all our personnel, from trainee to director: everyone in their own place has contributed to the Manoovr and its success.” 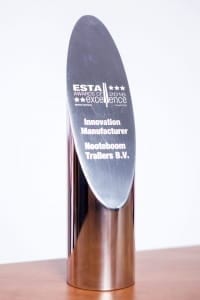 Soon after the introduction in October 2015 the Manoovr was nominated for the SV Innovation Award. The Nooteboom delegation nervously entered the room in the RAI building where the presentation was to take place. Marinka Nooteboom: “We worked on the development of the Manoovr with passion, but will that be enough to defy the competition?” Chairman of the jury Lejo Bekker: “With this innovative and technically clever approach and nationally and internationally prestigious result Nooteboom clearly contributes to the innovative character of the Dutch automotive industry.” Of the fourteen entries the Manoovr fulfilled the criteria best: durable, market potential, innovation, safety, ergonomics and environment. The jury pointed out that the development of the Manoovr offers the user practical benefits straightaway, such as extremely low tyre wear and reduced maintenance costs.

On 18 March 2016 the tension in Lutterworth (UK) was palpable. An extremely strong group of participants were nominated for The Heavies, the most important awards for special transport in England. The Nooteboom Manoovr was awarded a ‘Heavy’ in the category ‘Semi-trailers for abnormal transport with more than 5 axles’. From the jury’s report: “The design of the Manoovr is truly advanced. Important attributes: lower maintenance costs due to fewer moving parts, reduced tyre wear owing to optimal steering geometry and a 12-tonne axle load anywhere in Europe. Easy adjustment of the fifth wheel load makes it possible to safeguard optimal weight distribution when configuring the Manoovr with different tractors. Simple operation makes life easier for the drivers, who work hard enough already. The many different versions and options make the Manoovr suitable for a variety of loads. The low load floor can make the difference between carrying a load in one piece and having to take it apart to meet the height restrictions, which can be costly.

The ESTA Award of Excellence

On 14 April 2016 the prestigious “ESTA Awards of Excellence” were presented at the Bauma in Munich. ESTA is the most important European organisation for abnormal and vertical transport. In the category “Innovation by manufacturers” the largest European manufacturers of equipment for heavy transport and heavy-lifting were nominated. In spite of the illustrious field of nominees Nooteboom managed to land this award. This shows that the Manoovr is an important and revolutionary innovative product, even in direct competition with very strong European manufacturers. The main focus of the ESTA Awards is on technology. The innovative tower bearing of the Manoovr was the overriding consideration for the jury to present the Award to Nooteboom.

Being presented with three awards in a row: exciting moments when three times a panel of expert judges clearly favoured the Manoovr over the other nominees.
The fourth Award comes from the customers of Nooteboom. Because the continuous stream of orders for the Manoovr shows that the Nooteboom customers appreciate the exceptional advantages of the Manoovr.